In 1988, Coast Guard in Ohio encountered an egg-shaped UFO surrounded by smaller, fast-moving objects that "appeared to be scouting the area," an incident report states. The officials encountered UFOs that approached them, and scared them off by flashing their headlines. Some flew close to a nearby nuclear power plant.

That same year, a witness in Tom's River, NJ saw a black triangle UFO near a power plant there. A year later, a worker at a nuclear power facility in CA called the NUFORC hotline and claimed he and his colleagues saw a strange object emanating "columns of darkness."

Near the end of the 80s, declassified documents also show a plant in East Nebraska encountered a black triangle UFO that hovered over a restricted area for two separate nights, silently, before turning back and flying up river to the North.

How often are UFOs seen near nuclear power plants? And why does this occur?

Consider supporting our investigative and development work on Patreon:

It's [redacted] is a venture of It's Bloody Science! LLC, which created the narration and editing of this video. All other images, sounds, music and video clips are freely available in the public domain or Creative Commons licenses, or are licensed via Powtoon software or the YouTube Audio Library.

Song no. 2: Invariance by Kevin MacLeod is licensed under a Creative Commons Attribution license ()
Source:
Artist:

Song no. 3: Interloper by Kevin MacLeod is licensed under a Creative Commons Attribution license ()
Source:
Artist: 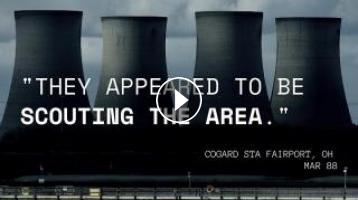