I was humbled by the massive success of my single “Survive” in Russia, and later on many of the surrounding countries in Eastern Europe. When the whole country embraced the song and it went gold followed by platinum (!) I felt like I wanted to give something back.

I met Eldzhey . Sayonara Boy at a big radio event in Moscow. We had an inmediate click, despite our language and cultural barrier. When the idea was formed to do something together I decided that it would actually be supercool to do something in another language, other than English for a change.

When we finished the track I started testing it out in my sets all around the world, from Tokyo to New have been very strong despite the language barrier! So it proved to me that in the end MUSIC is the universal language and we decided to put our song out as soon as possible. On paper it’s a total clash of two different cultures which makes everything extra interesting. East meets West bundled into in one record. We both kept our own identities throughout the whole process and I couldn’t be more excited as it feels like so many new doors are opening for both of us! Let me know in which other languages you want to hear a Don Diablo song! Much love, 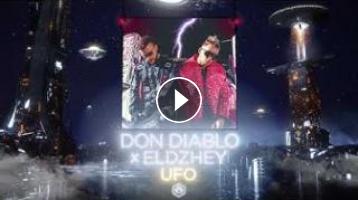 Stream & download UFO here: I was humbled by the massive success of my single “Survive” in Russia, and later on many of the surrounding countries in E...