On April 27 the Department of Defense issued a statement confirming the release of three videos showing US Navy jets chasing "unidentified aerial phenomena" -- that's the approved military term for what the public calls UFOs. The videos had been in the public domain for some time, but there was always a degree of doubt about them. The Pentagon statement made it official: Yes, the videos are genuine, and no, the DOD still doesn't know what these things are -- the official categorization is "unidentified".

The timing of the Pentagon's announcement drew a lot of comment. Why release these videos now, people asked, with the world's attention focused on the coronavirus? Was this a classic example of "a good day to bury bad news"? If that was the Pentagon's plan, it backfired badly. Perhaps because we've been so saturated with COVID-19 coverage, everyone was looking for something else. Far from being buried, the story made headlines all around the world.

Nick Pope and Steven Greenstreet dive deep into the facts and evidence surrounding recent UFO reports and offer a new groundbreaking revelation... that the US Navy patented an electromagnetic craft that looks strikingly similar to UFOs seen in the skies for years. 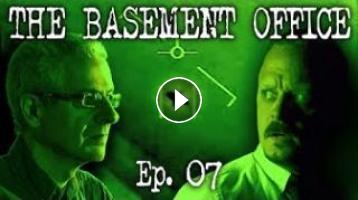 NEW EPISODE of The Basement Office!On April 27 the Department of Defense issued a statement confirming the release of three videos showing US Navy jet...