3:59 - PLIGHT OF THE LIVING DUDE
Even zombies can’t compete with the last level of Pencilmate’s favorite video game.

5:46 - INDEPENDENCE DAY
The 90s classic, aliens and all, but of course Pencilmation style!

9:59 - ONE BOO OVER THE CUCKOO’S NEST
A friendly ghost and a little dog find friendship against adversity.

14:02 - NOTORIOUS
Pencilmate realizes the pig he’s been ignoring is nothing less than a piggy…bank!

22:28 - BUG TO THE FUTURE
Pencilmate gets turned into a bug. From a fly to a worm to a butterfly, which will he like best?

ABOUT PENCILMATION :
Pencilmation is a cartoon channel for not-too-serious grown-ups. It is made with love and a lot of fun by an international team helmed by Ross Bollinger who started the channel alone in his room a long time ago. Follow the new, wacky, and often times quite silly adventures of Pencilmate, Little Blue Man, Pencilmiss and other toons every Tuesday and Saturday. 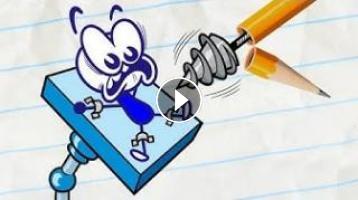