33 Просмотры
admin
On May 12, 2020 numerous videos show unidentified flying objects above the sky's of Mage, Brazil. Several witnesses report multiple possible UFOs crashing in the nearby forests. By morning witnesses reported strange smoke rising from a nearby military factory, gunshots, explosions, and eerie blue lights coming from the forest. The internet was set ablaze as people tried to report on what happened that night in Mage. Listen as our hosts sort through all the details about one of the highest profile UFO sightings since the Phoenix Lights!

The extended portion of the show is EXCLUSIVE to our patrons. Our hosts continue the discussion on the Mage UFO Incident. In this segment they discuss the anonymous military whistle blower that came forward with reports that it was more than just UFOs spotted that night. Multiple alleged witnesses have come forward stating military officials recovered not only UFOs from the forest, but even 3 alien bodies! The conversation for sure heats up in this segment! If you wish to sign up to become a patron and get this EXCLUSIVE content sign up at 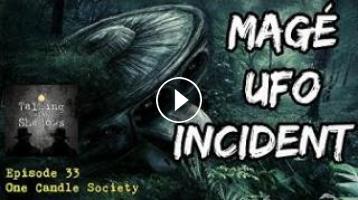